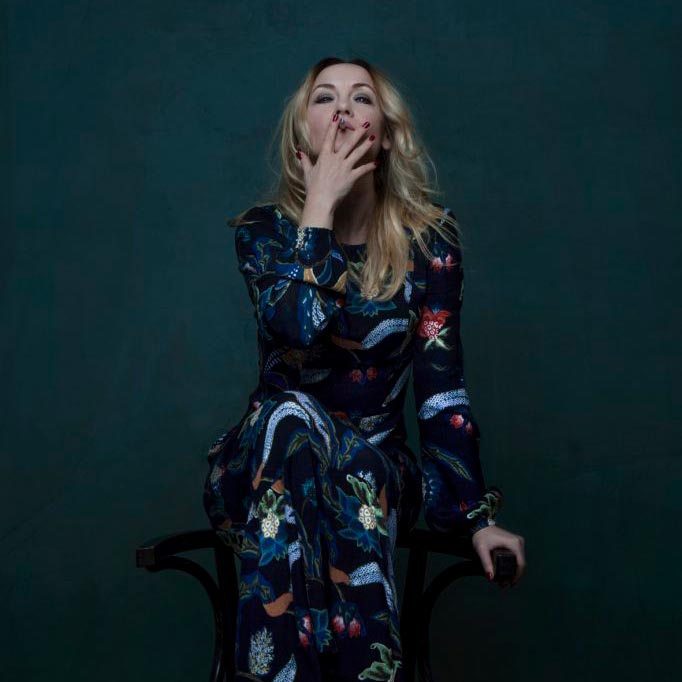 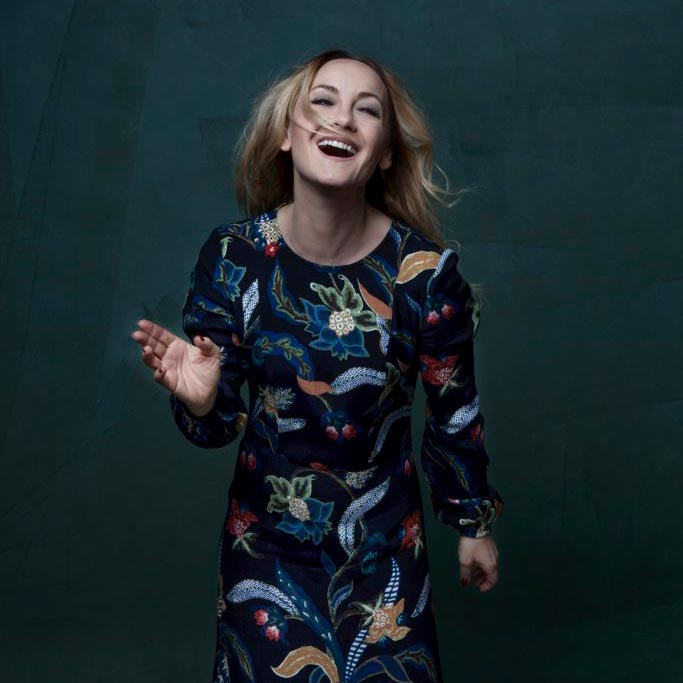 Katharine Mehrling cannot be categorized into one genre alone. At home in her native Germany, she is regarded as the harmonious Symphony of It All.  ‘One of the most exciting jazz voices of our time’, wrote the magazine AnDante not long ago, as they dedicated a special edition to her, in order to promote the grand opening of her record label, MEHRlingMUSIK.

German actress, singer/songwriter and chansonnière, Katharine Mehrling – celebrated star of the Berlin stage – is one of Europe’s greatest leading ladies of the musical theater today.

She is the six-time winner of the Berlin Theatre Association’s Best Actress Award for her portrayals of Judy Garland in END OF THE RAINBOW and Diana Goodman in NEXT TO NORMAL, as well as for her major triumphs in the Komische Oper Berlin as the raunchy Cowboy heroine in Emmerich Kalman’s ARIZONA LADY, the gender-bending, female jazz composer Daisy Darlington in Barrie Kosky’s renaissance of the “degenerate” Berlin jazz operetta BALL AT THE SAVOY by Paul Abraham and for her thrilling interpretation of Eliza Doolittle in MY FAIR LADY.  She was collectively awarded yet another Berlin Theatre Association’s Best Actress Award for a number of solo shows at the Bar jeder Vernunft:  PIAF AU BAR, MEHRLING AU BAR and VIVE LA VIE. She also received the Grand Prize for Best Actress for her performance as Fanny Brice in FUNNY GIRL at the 2019 Bad Hersfeld Festival and was awarded the “Berlin Bear” Award for Culture, for her outstanding performances within the cultural landscape of Berlin.

Born and raised in a small village near Frankfurt, Mehrling always felt drawn to the larger metropolises of the world, studying acting and musical theatre in both London and New York.

Her unparalleled singing and acting career began with the London West End revival of HAIR – at the Old Vic Theatre – and would lead to numerous starring roles throughout Europe, in productions of IRMA LA DOUCE, KISS ME KATE, PIAF, THE THREE-PENNY OPERA, TELL ME ON A SUNDAY, CABARET, and EVITA at the Ronacher Theater in Vienna, under the tutelage of director/choreographer Vincent Paterson.

Katharine has been recognized as one of the greatest interpreters of Edith Piaf chansons. In honor of Piaf’s 100th birthday, she gave a double-gala concert event with an orchestra of 70 musicians in the Komische Oper Berlin. She was especially and deeply honored to welcome Piaf’s final composer, Charles Dumont (‘Non, je ne regrette rien‘), as a guest, who travelled in all the way from Paris to hear her sing.

Collaborating with legendary German jazz clarinet player, Rolf Kühn, Katharine composed the songs for her album AM RANDE DER NACHT (ON THE EDGE OF THE NIGHT).

Mehrling also has credits in both European film and television and was featured as a singer in the film VALKYRIE, starring Tom Cruise.

In May of 2019, she released her single STRAßEN VON BERLIN (STREETS OF BERLIN), which was supported by the Babelsberg Film Orchestra (Text: Katharine Mehrling, Music: Paul Hankinson & Katharine Mehrling). A short film noir to her song was recorded in Berlin (Direction: Katharine Mehrling, Production: Titus Hoffman) with Jannik Schümann, Tilmar Kuhn and Dagmar Biener.

Following her smash-hit New York City concert debut in 2018 at Joe’s Pub in the Public Theatre, where she stopped the show with a remarkable four standing ovations, Katharine returned to Joe’s Pub in October 2019. She also was invited to give a concert at The Cabaret in Indianapolis. Upon personal request from the consul general, David Gill, Katharine sang two concerts at the German consulate in New York City.

Within the realm of the Berliner Festspiele, she was featured as a special guest in Taylor Mac’s monumental show ‘A 24-DECADE HISTORY OF POPULAR MUSIC’.

After having worked together on Paul Abraham’s jazz operetta BALL AT THE SAVOY, Mehrling and director Barrie Kosky remained connected through a fiercely special, artistic friendship.

With their concert LONELY HOUSE  (Premiere: December 2019), the two artists dedicated themselves to paying homage to the late composer, Kurt Weill, for whom both share a mutual love and reverence. The large house of the Komische Oper Berlin was transformed into an intimate setting, in which they presented French and American songs from the period of Weill’s exile to Paris and New York.

In December 2019 and January 2020, Mehrling appeared in multiple concerts with the Brandenburgisches Staatsorchester Frankfurt:  100 YEARS ‘THE GOLDEN TWENTIES’. Mehrling interpreted the repertoire of the Weimar Republic with chansons from Friedrich Hollaender, Kurt Weill, Mischa Spoliansky, Werner Richard Heymann, Paul Abraham and Otto Reutter. The premiere took place on December 28, 2019 in the Konzerthaus at the Gendarmenmarkt in Berlin.

In the Fall of 2020 – between Corona lockdowns – Katharine gave 13 concerts with her big band in Tipi am Kanzleramt entitled IN LOVE WITH JUDY – a declaration of love to Judy Garland and the Great American Songbook.

On the 13th of December 2020, she made a special guest appearance with star violinist, Daniel Hope. The live-recorded broadcast HOPE@HOME is still available until March 14, 2021 on the ARTE media streaming platform.

On December 22, 2020, her Kurt Weill concert LONELY HOUSE – together with Barrie Kosky at the piano – was live-streamed from the Komische Oper Berlin and was available for a month on the Operavision streaming platform, as well as YouTube. In the New Year’s Eve edition of the New York Times, the successful live-streamed event was a topic of discussion and recommendation.

Katharine Mehrling is a Power Planet in this Universe

One of the most sensational voices on Earth.
Katharine Mehrling interprets the songs of Kurt Weill with a voice that takes in the air of Berlin, the streets of Paris and the loneliness of exile in New York. She sings them as if they were written for her.

La Mehrling, the Talent of the century, is a force of nature. Magnificent!With her unique voice, which expresses so much soul, she sends shivers up and down the spine

She penetrates directly into the heart and mind, and even more, into the soul of her audience.

Katharine Mehrling is a sorceress. That voice drowns you like an ocean wave with a dangerous undercurrent. She has an aura of fragile audacity.

Her voice is pure magic, smoky and intimate, yet it blows you away

Katharine Mehrling is a must-see performer.

Take a healthy dose of Edith Piaf's fervor, a pinch of Judy Garland's throbbing vulnerability, a dash of Marlene Dietrich's sleek streetwise sexiness, and top it off with a sprinkle of Bernadette Peters' raspy show-biz pluck, and you just might get Katharine Mehrling
... a first rate and exacting interpreter of the Weimer era.
..... Watching her myriad of gifts unfold on the Joe's Pub stage.
...it's a name you'll want to remember.

... But what Mehrling really has that makes her equal to the challenge of La Môme‘s legacy is guts. The courage and passion in her singing were a cri de coeur, calling out the dignity of suffering for love, regardless of poverty and adversity.
...Mehrling brought a sense of ownership to everything she sang.
.... her natural sound has a fine-grain sandpaper texture that microphones love, her range was beautifully supported throughout with a strong high belt that she used sparingly and with great taste, and she seamlessly moved between power and subtlety.
Next time Mehrling comes to New York, make sure you’re there. It’s a rare and beautiful thing to be in the presence of this kind of artist, who makes everything her own, channels but never imitates the greats, and is humble and strong enough to balance her formidable skill with great humanity and vulnerability on stage.

.... Let us begin with her stage presence. Ms. Mehrling illustrated the metaphor of "holding someone in the palm of her hand", but in this case it was the entire audience. It seemed to be an act of magic to unite all those people into a single unit....