„To hear and see Mehrling perform a song such as I’m a Stranger Here Myself (from One Touch of Venus, the 1943 Broadway musical Weill wrote with poet and lyricist Ogden Nash), is to experience the oyster of American musical theatre being infused with the grit of European cabaret. Mehrling, who is as gloriously expressive when singing in French as in English, is the very picture of theatrical elegance in a lovely, black velvet dress. However, as Weill’s music demands, her performance has an erotic, sometimes discomfiting edge as she kicks off her shoes and climbs onto the grand piano. Her singing of such well-known numbers as September Song and Speak Low is more than just testament to the beauty and range of her voice. They are filled with a yearning and regret that express, not only the fragility of life and love, but also, as Kosky comments, “the destruction of the European soul” in the Nazi Holocaust.“

Lonely House review – noir-shaded selection of Kurt Weill’s hits from exile
Old College Quad, Edinburgh
Katharine Mehrling delivers the German master’s songs in ravishing style, accompanied with restraint by pianist Barrie Kosky.
Sitting atop the grand piano, Katharine Mehrling is picked out in a single spotlight, her blond hair and velvet dress emphasising the contrast between light and shade. It could be the closing image of a black-and-white movie.
Mehrling’s tones are warm and assured, her range comfortably embracing everything from cabaret chanteuse on Le Grand Lustucru to sharp-talking propagandist on the fidgety Schickelgruber, an anti-Hitler polemic.
On the tongue-twisting Tchaikovsky, she switches the words to rhyme with “Barrie Kosky”, while the pianist hits the keys with the nervous urgency of a man at a typewriter. His settings are typically spare and restrained, giving the singer all the room she needs for a plangent and seductive show.

Lonely House
Available now until Jan. 22; operavision.eu and on YouTube. This winter, Katharine Mehrling was scheduled to reprise her Eliza Doolittle in “My Fair Lady” at the Komische Oper in Berlin. The pandemic got in the way, but the company’s devoted audience need not spend the season without this singer’s gifts. This performance (first streamed live late in December) offers a fresh look at Kurt Weill, focusing on that composer’s years in Paris and New York. Devotees know many of these songs. But Ms. Mehrling’s energy — aided by Barrie Kosky, the Komische Oper’s artistic director, on piano — gives a saucy charge to a medley from the rarely staged “Lady in the Dark.” 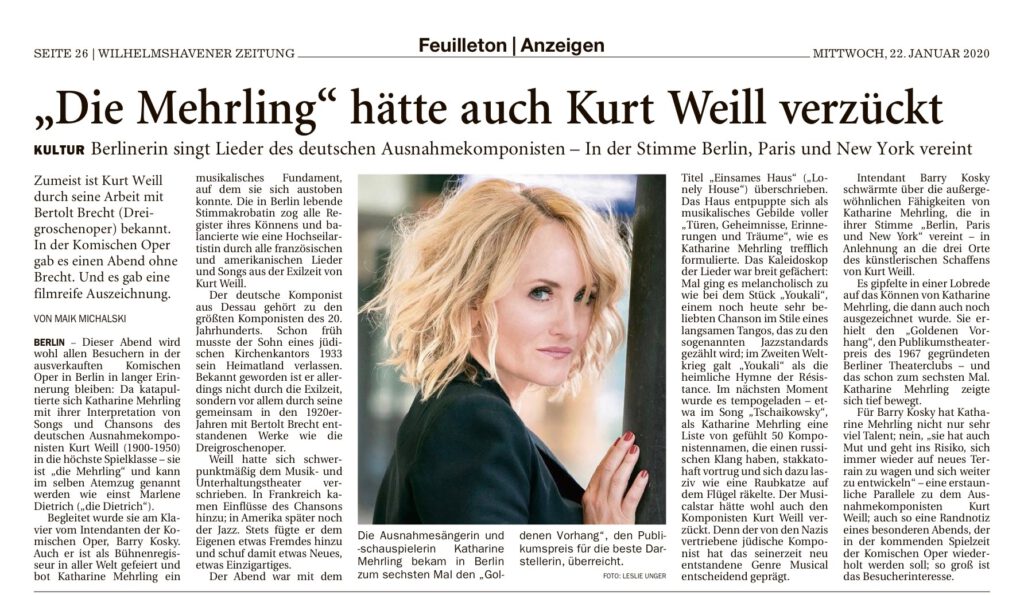